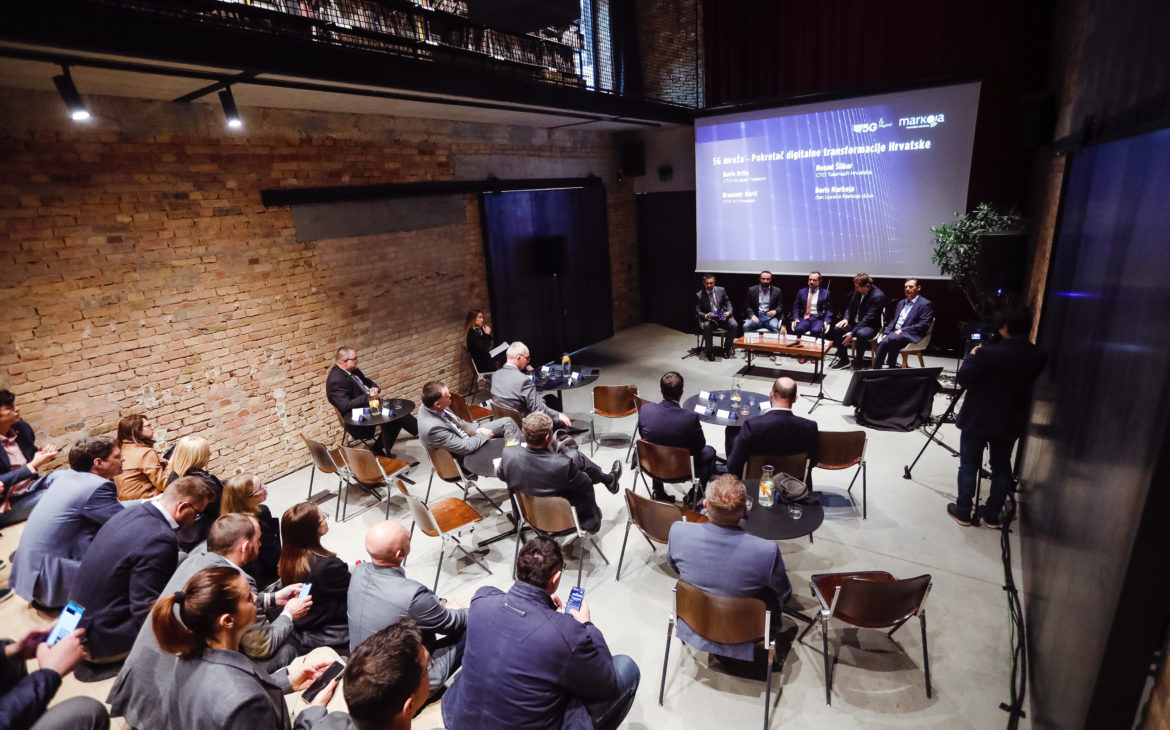 The development of the 5G network will attract enormous investments in both Croatia and worldwide, increase the total global GDP, as well as change everyday life and improve the economy, said the leading people of Croatian telecommunications companies at the “5G&beyond” conference, organized by 5G.hr and the company Markoja.

The panel discussion on the topic of “5G Network – Driver of Croatia’s Digital Transformation” – regarding their investment plans and the future that the next-generation network promises – included the following speakers: CTIO of Hrvatski Telekom Boris Drilo, CTIO of A1 Croatia Branimir Marić, CTO of Telemach Croatia Nenad Šlibar, and Boris Markoja, Board Member at Markoja.

Boris Drilo, CTIO of Hrvatski Telekom, emphasized that Croatian mobile networks were one of the best in Europe, which is why it takes a lot of effort by telcos to keep them at that level. He also opened a topic that worries all telecoms alike: the great pressure caused by inflation and rising electricity prices, which pose a challenge to the pace and volume of investments in the near future.

“The goal of development, which is the 5G network everywhere, depends on the investment potential of the operator. 5G will consume significantly more electricity compared to existing networks, and we are facing unfavorable market trends. We are very careful about raising prices for customers, but there is great pressure due to increased rental and electricity costs,” said Drilo, adding that Croatia is ahead of others in the number of base stations and that we are among the three European countries that have received licenses for new frequency bands.

In this context, he stressed that telecoms were interested in strong investments, but that it was crucial to maintain the positive momentum created around the development of the fifth-generation network in the medium term. He pointed out that data traffic has increased tenfold in the last decade and that investments in infrastructure have been launched in order to maintain the quality of customer service, which in Croatia is at an enviable level compared to the rest of the world, as proven by a number of awards by global analytics companies.

Branimir Marić, CTIO of A1 Croatia, also spoke about the increased costs, emphasizing that the price of electricity has more than quadrupled in the last few months. However, he said that every operator in Croatia is ready for large investments in both fiber optics and the 5G network. Thus, Marić expects that every operator in Croatia will invest at least €100 million directly in infrastructure, along with hundreds of millions of Euros to be invested in fiber optic cables.

The challenge will be to build infrastructure in rural areas, given that due to lower population density, investments per capita are many times larger than in cities. Boris Markoja, Board Member at the company Markoja, pointed out that the goal was to offer stable access to the new-generation network at affordable prices, and that support from the European Union was key in this aspect.

“Prices for residents of rural areas should be comparable or equal to the prices in urban areas, where the investment per subscriber is significantly lower. Therefore, in addition to EU funds, local authorities should provide support by approving the use of existing infrastructure to investors in telecommunications infrastructure in rural areas,” said Markoja. When it comes to deploying 5G technology and 5G infrastructure, it is very important to highlight, he adds, that we should all be thinking about sustainable development.

“It is important to build new infrastructure according to the 5E principles: energy – where we must consider efficient use; economy – that is, building new parts of the city’s infrastructure so that investments are economically justified; ecology – taking care of the Earth; esthetics – ensuring that new parts of the network blend into the environment; and ethics – to provide internet access to all without harming anyone in the process of building the network. Respecting these 5Es, a significant part of the locations could be covered with environmentally friendly materials, and here we are primarily talking about the return of industrially laminated wood as a carrier of infrastructure,” Markoja concluded.

“Hundreds of millions of euros of investment should bring returns not only in the telecommunications sector but also throughout the economy, however, the multiplicative effects depend on the top of the pyramid,” said CTO of Telemach Croatia, Nenad Šlibar.

“Some estimates say that due to investments in digitalization, GDP at the EU level will increase by €100 billion, and in Croatia alone the positive contribution of 5G technology in the next ten years is estimated at 1.5 to 15 billion euros. How much it really will be depends on the ICT industry, as well as on the end users, especially in the public sector such as healthcare, on whose reform it depends whether they will use this opportunity,” Šlibar explained.

And the opportunities for development are huge, all telecom leaders agree, because in the future we will have a world of networked devices and people, completely connected to the internet, and new technologies and services could completely change the habits and lifestyle of the average person.

Thus, Boris Drilo believes in the potential of a changed reality, which could change the way we live, adding that HT is already building an infrastructure that will enable the full development of the metaworld and IoT.

“The generation born after 2008 is the native generation of the metaverse, and it is for them that we are building the next phase of 5G technologies. Services and solutions will be created that will fully develop the potential of the 5G network, as was the case with the 4G network, which was a prerequisite for the explosion of applications and the use of smartphones,” said Drilo, pointing out that we still lack real 5G-based apps and the so-called “killer application”, which should mark a turning point in the way we use the network and connect all things and devices.

That we are a step away from the goal in the context of developing full potential is also maintained by Marić, who points out that we are still waiting for the move that will network hundreds of thousands of devices and mark a real breakthrough, which 5G infrastructure enables.

“5G is an evolutionary technology that continues on the highly successful 4G. The general digitalization of society is now underway and people who don’t know how to use the internet are partially outcast. We are facing the development of the Internet of Things and the number of connected devices per household is on the rise. We are currently on 5 and 10 connected devices per household, and not so far in the future, each household will have 50 to 100 connected devices,” said Marić, adding that 5G is only the first phase of networking. After 5G comes 6G and with that generation comes an increase in spectrum efficiency, the use of much wider frequency bands and an increase in the number of devices that are connected, he explained.

“For now, we have no idea what [6G] really brings, but I think we are moving towards a fully connected planet and it’s likely there will be no corner of the world that is not connected,” Marić concluded.

Such connectivity and robotization of services will bring numerous advantages, Nenad Šlibar is convinced, claiming that in countries like Croatia, digitalization can increase in the quality of life of people in rural areas. He stresses the great potential in the application of 5G technologies in healthcare through remote treatment and consultations, from which the people who live outside the cities, i.e. who are far away from the best doctors, can benefit the most.

“Artificial intelligence is not created in and of itself but by human input, so this technology and the processing of huge amounts of data can help develop new human-centered services that improve quality of life,” concluded Šlibar.

At the end of the panel, the host of the conference Boris Markoja noted in his closing remarks that technology must serve people, and that in the future it will be very important to draw the line between real and virtual life, which will become increasingly difficult for each new generation to come:

“As far as technology is concerned, the future is limited only by our imagination. Soon there will be services on the market that today we think do not have users, but they will be created very soon, and there will be users who do not know about all the services that exist but may need them soon. It is important to enable the present generations to lead a normal life, with as much use of technology as they are ready to master in a shorter and shorter period of time, in light of the very rapid development of technology.”