Telecoms to Government: Ensure construction of 5G infrastructure and tax reliefs for employees and we’ll take off in Europe 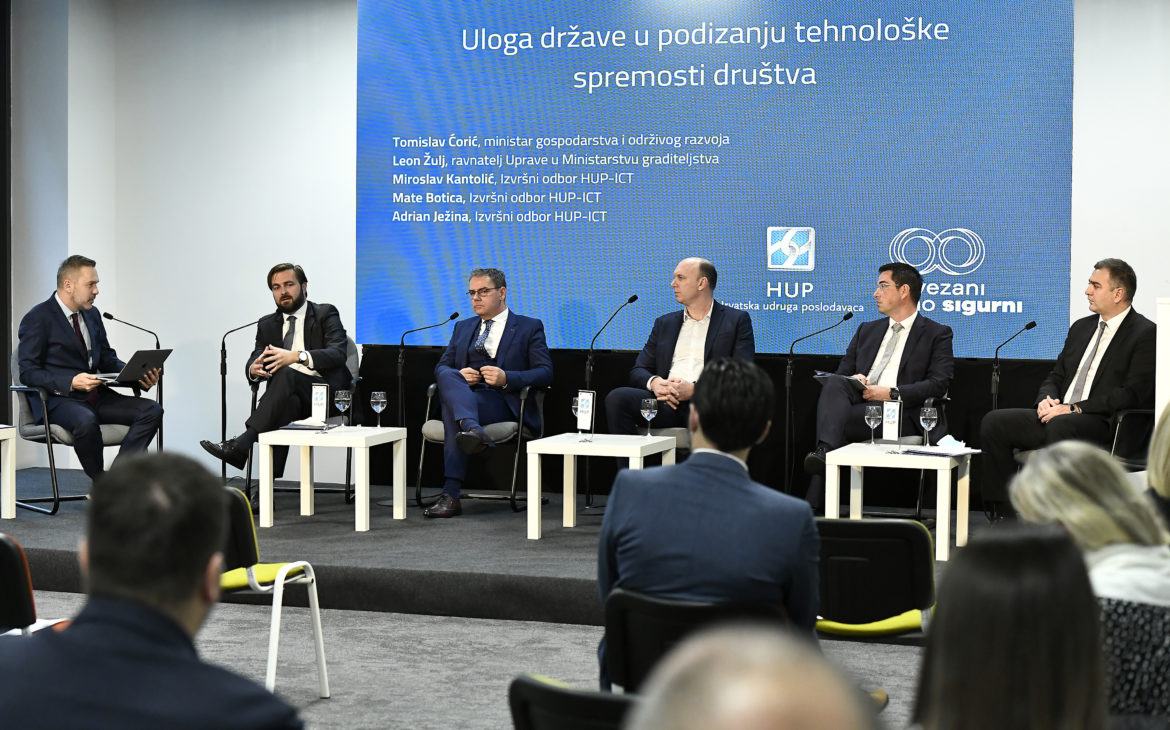 The Croatian government is changing its paradigm in relation to supporting the economy, so instead of rescuing fallen companies, it will direct EU funding transfers to the most propulsive industries, including the ICT industry.

This was explained by the Minister of Economy and Sustainable Development Tomislav Ćorić at the conference of the Croatian Employers’ Association (HUP) organized with the support of Hanza media, “Technological Progress – the Basis for Croatia’s Economic Competitiveness”.

“ICT is great and we as the Government will strongly support all those who have the strength to play the regional or global game. For the first time, we are in a situation where we have secured the funds for all our plans, and our idea is to concern ourselves with the “high achievers”, Ćorić said and announced the adoption of a strategy for the development of the AI sector and a national plan for digital transformation.

In the Smart Specialization Strategy conceived by the European Commission, the ICT sector is positioned as an industry vertical, i.e. a strategic industry, which will have direct access to EU funds and is taken into account when planning Croatia’s development. ICT earned this position because last year, despite the pandemic, it was one of only three industries in Croatia that experienced growth, and, as HUP director Damir Zorić pointed out, the industry has been showing stable double-digit annual growth in recent years. It might grow faster if its pace were accelerated through the regulatory environment, but the industry’s biggest problem is the lack of a highly educated workforce, so employers are calling for special tax treatment of industry employees and increased education of students in the sector, and even the import of young talent to universities. Croatia is seventh in the world in terms of the number of unicorn companies per capita, but only 19th out of 27 EU member states in terms of digitalization. When this data is placed in the context of the global economy, where Europe is losing to the USA and Asia, we are certainly not digitalized enough, so the leading people of ICT call for favorable regulation and government support to convert Croatia into a country that will excel in Europe and put itself on the global map.

The central theme of this development is the implementation of 5G technology in the economy, offering previously inconceivable potential. The introduction of 5G infrastructure will bring billions of kuna (HRK) in investments, but that is just the tip of the iceberg of what this industry can really bring.

“The introduction of 5G is going to change the global picture in five to ten years. At the moment, the next-generation network is the basis for faster digitalization and technological advances, but it will also develop products and services that we can’t even perceive today,” explained Adrian Ježina, CEO of Telemach and member of the HUP ICT Executive Board.

Miroslav Kantolić, Sales and Marketing Director of A1 Croatia, welcomed the vertical position of ICT and reminded all that 5G has been present in Croatia since 2018. He pointed out that the number of 5G network users is rapidly increasing, already exceeding half a billion people worldwide, and the initial data on 5G subscriptions shows that these users use 40 to 50 percent more data than 4G users, which means they have more information and use new applications and services, just as the industry predicted.

“The accompanying technology delivers high transfer rates and very short network response times, which is a major technological breakthrough in potential applications and brings great global development. More than half a billion people in the world use 5G already, and by the end of the year there will be 660 million users of the next-generation network,” Kantolić said.

Kantolić also broached the subject of labor shortage in the sector employing about 45,000 people in Croatia, but also noted that the labor problem is present across the EU and concluded that Europe is lagging behind in 5G development not because of a lack of technology but precisely because they can’t find people with the right skills. Therefore, on behalf of HUP, he proposes tax reliefs for ICT employees, making space for the arrival of foreign students, and even the introduction of mala matura (the national exam at the end of primary education).

Naturally, the development of 5G depends on the infrastructure, and in Croatia, its development is under pressure from local spatial planning.

“We need a denser network with more base stations and it should be said that local governments cannot be given the task of deciding on infrastructure development because some units are not even competent for such work. After all, the EU directive says that all citizens must be ensured unhindered access to new technology at the best possible prices,” Ježina stated, adding, “Today, 5G serves to increase capacity, and it will be some time before you’ll be able to get from Zagreb to Vis by an autonomous vehicle, as it will primarily depend on the density of 5G stations.”

He was assured by the representative of the Ministry of Construction and Spatial Planning, Leon Žulj, that the government is actively working on ensuring the construction of infrastructure, while Minister Ćorić admitted that there is resistance in local communities to build infrastructure for the 5G network, but reckoned that the political and local authorities support for these initiatives will wane the more time passes from local elections. This resistance is rooted in the citizens’ fear of high radiation, but 5G is being developed at a frequency of 700 MHz, which was used for television 60 years ago, and 3500 MHz, i.e. radiation at the level of home Wi-Fi – it was explained at the conference, stressing the need to invest energy in education.